from 2010 Showcase of Homes For Local Charities 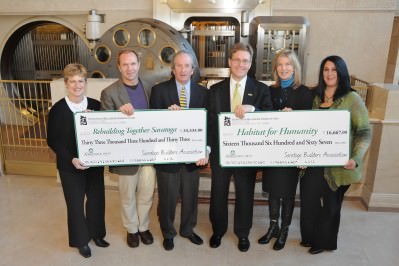 After a one-year hiatus, the 2010 edition of the Showcase of Homes came roaring back in spectacular fashion and was the largest ever in its history. The inaugural “Chefs – Saratoga Style” evening kicked off the Showcase and was sold out. The event was a tremendous success with over 3,500 people touring the 16 beautiful homes on display in Saratoga County. The wonderful autumn weather over the three weekends contributed to the exceptional turnout, but it was the line up of 15 unique, award-winning builders that attracted the crowds.  Their artistry along with the many talented designers who helped showcase their fine work gave our community an opportunity to preview current trends in building, decorating and interior design. In what has become a tradition in our area, the Saratoga Builders Association is looking forward to keeping this long running show, which just concluded its 15th year, a vital part of the fabric in our fall season. The 2011 Showcase of Homes dates have been set for September 17-18, 24-25, and October 1-2.

About the Showcase of Homes

Sponsored by the Adirondack Trust Company along with 40 other generous sponsors, this year represented the largest in showcase history with 16 homes on the tour. All the homes were located throughout Saratoga County and were on display September 18 & 19, 25 & 26 and October 2 & 3. Proceeds from the Showcase benefitted Rebuilding Together Saratoga County as well as Habitat for Humanity of Northern Saratoga, Warren and Washington Counties. For more details and all the award winners in the recently concluded Showcase event, please visit www.saratogashowcaseofhomes.com.

The Saratoga Builders Association, Inc. (SBA) is a specialized professional trade association representing an industry basic to the wellbeing and economy of the people of Saratoga County. Its membership includes residential and commercial builders, developers, remodelers, building material suppliers, sub-contractors, financial institutions, architects, engineers, realtors, attorneys and other industry professionals. SBA is committed to the continued growth, prosperity and quality of life in Saratoga County. For more information, please visit www.saratogabuilders.org or contact Barry Potoker, Executive Director at 366.0946 or bpotoker@nycap.rr.com.