How does designer/builder John Witt do it?

Awarding-winning Saratoga Springs builder John Witt has many different styles to suit his clients.  But one special skill that people seek him out for is his special expertise in building with Saratoga style–- in the Saratoga vernacular.

What does building in the vernacular style mean?  It connotes learning from the past architectural presence of a region and reinterpreting for the way people live today.  In John’s case, the elements he might find in a carriage house, a farmhouse, a cottage, or a Victorian house become “my palette and the foundation of a design,” he says.

“Saratoga architecture is very inspiring in thought and design,” he continued.  But he doesn’t stop there.  He also incorporates details he has gleaned from his travels in places like Newport, Rhode Island as well as Italy and France.

His particular skill is in bringing various elements together to fit into the Saratoga landscape.  His designs are never imitative, but fresh and richly complex.  If you visit any number of John’s houses that he has designed and built over the past years, you’ll discover that while he has absorbed the past of the local area, he has moved beyond it, developing his own sensibility and passions for fine building while meeting the requests of his clients.

Whether you want a Saratoga-type carriage house, a country farmhouse, a charming cottage, or a Victorian-inspired home, John Witt can advise you and help you find your way. 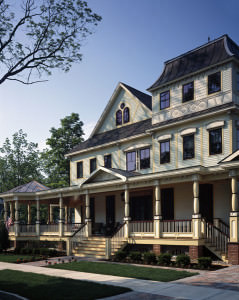 3 responses to “Building with Saratoga Style.”